Power Sheets: When ‘Bankers’ Aren’t Always What They Seem

If you’ve had any exposure to sports betting, the term ‘banker’ is probably familiar. At Predictology, a collective shiver goes down the spine of the team whenever we hear that word. It usually relates to a poorly researched ‘tip’ at short odds that don’t offer any value whatsoever. Yes, Barcelona ‘should’ beat Getafe at the Camp Nou, but is it worth a flutter at odds of 1.18?

The truth is, there is NO SUCH THING as a banker. Unless, of course, the match is fixed, and you’re in on it. Even then, a fix can go wrong!

However, there ARE value bets at short odds. Logically, if a wager has a 75% chance of winning (implied odds of 1.33), and you get odds of 1.55, that’s a significant edge in your favour. What Power Sheets can do is help you uncover odds-on value bets. In the next few weeks, we look at our data in detail and uncover useful trends.

This week is all about seeing if there is any value in odds on home or away wins. In the process, we found something rather interesting when we decided to go against the odds on market.

Predictology members have access to almost a year of data, via our new Power Sheets feature for members, which consists of approximately 14,000 games (and is growing all the time). Of those, almost 5,000 teams started the game as an odds on favourite, while 2,200 away teams carried that distinction. Obviously, backing blind would lead to substantial losses. However, let’s see if we can use Power Sheets to find some profitable angles.

Once you click on AI Report under the Match Analysis tab, you are greeted with the screen above. Input your preferred date range on the left, and select any leagues you want within the Predictology system. When you’re done, press ‘Export’ on the right-hand side. It will download a spreadsheet that contains all the data from the date range and leagues you selected.

The spreadsheet will probably look daunting the first time you see it. However, in the next few weeks, we will outline how to decipher the labyrinthine level of information! The above is three months’ worth of data covering almost 6,000 games. That should be enough to find a trend or two! 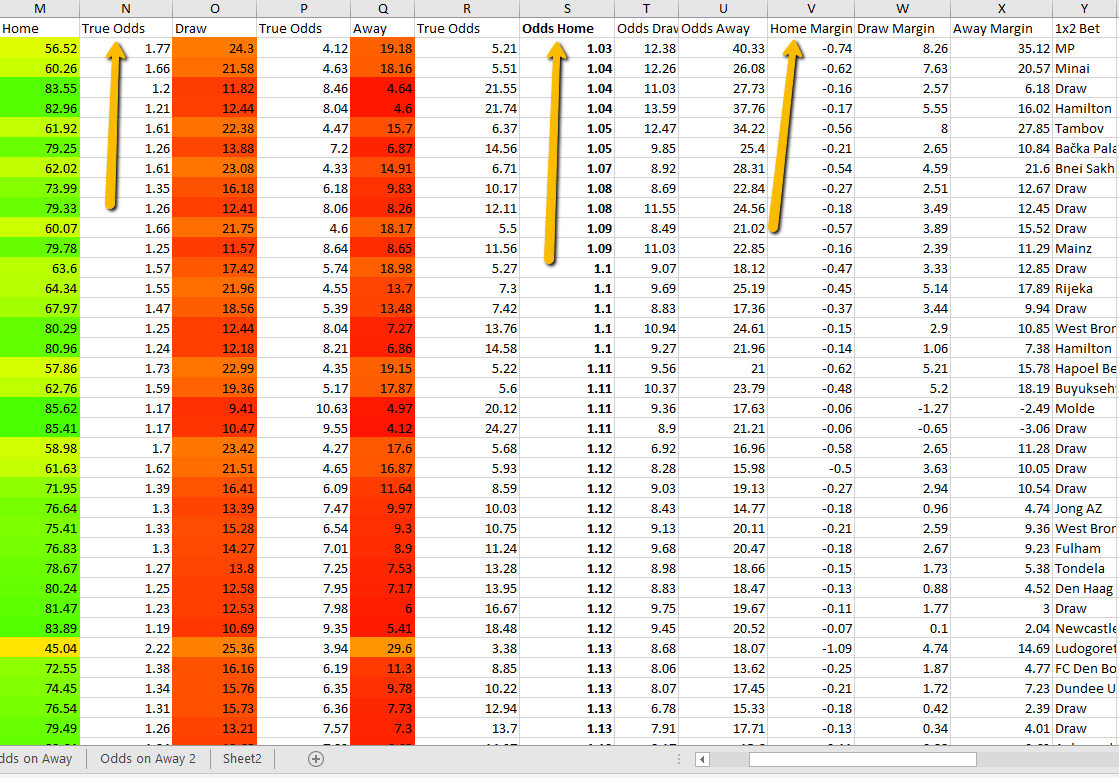 Going straight into the action, today’s relevant columns are from M to X (your sheet may vary). It includes the following:

We need to sift through the data to see if we can uncover any possible angles. Use your imagination, and you’ll be surprised where the numbers take you. I extracted all the teams that were odds on at home in one sheet and the odds on away sides in a separate sheet. There were almost 1,800 games in the home section and nearly 800 in the away one.

Here’s what I found:

These were surprising results as you would expect a higher home win percentage. Perhaps the lack of crowds is hurting weaker teams?

You should play around with the sheet. In the screenshot above, I selected home teams that were odds on AND had a home margin of at least 0.10 in their favour. In other words, the true odds of these teams winning, according to our AI, was 0.10 decimal points or more above the odds offered by the bookmakers.

For example, Arbroath’s true odds were 1.51, but the bookmakers offered 1.95, which equates to a margin of 0.44. They subsequently lost 1-0! Incidentally, subtracting the away team’s score from the home side’s score lets you see who won. In Cell K, a score of 1 or above means the home side won. A score of 0 indicates a draw, and -1 or less means an away win. For the record, I added this information myself AFTER exporting the data.

See if you can find an even more efficient means of determining the percentage of winning bets.

In any case, I was shocked by what I found. In the admittedly small 108-game sample, only 49 of the home teams won at odds on prices! This equates to a win rate of 45.37%. Just over 32% of games were drawn, with a little over 22% of these games ending in an away win.

Laying the home team to win would have resulted in a win rate of over 54%, a guaranteed profit!

If you placed a lay bet on all 108 games, you would have earned a profit of 30 units, an exceptional ROI of over 27%! This assumes that you use fixed liability. It means you use one unit as your total liability regardless of the odds.

One thing that the Predictology AI has picked up well is away teams with an overrated chance of winning. There is profit to be had by looking for teams that our AI gives a less than 40% chance of winning away from home, BUT is still odds on with the bookies.

In a sample of 122 such games, these away sides have won just 50.4% of the time. This means that lay bets can prove very useful with a strike rate of over 49%.

As you can see, the home side has a favourable margin in each case. Overall, you would earn 12 units from 122 wagers, an ROI of almost 10%.

Final Thoughts on Odds On ‘Bankers’ via our Power Sheets

There are plenty of worthwhile odds on bets, and we invite you to look for them within Power Sheets. However, at Predictology, we have already discovered that you can find real value in laying home AND away teams that are odds on with the bookmakers if you look hard enough. See for yourself, and try to create your own systems based on what you find.