In part one we took a complete, in-depth look at the popular Lay The Draw (LTD) strategy and how it can still be profitable today.

Today we are going to show you a couple of advanced ways you can use Predictology to both significantly improve your LTD profits, and also some of the ways in which Predictology can improve not just your betting, but also your Trading.

Lay The Draw – A Quick Re-Cap

As the name suggests, in lay the draw, you bet against a draw happening in the match. You win the bet if the final outcome of the game is anything other than a draw. Simple right.

In fact if you look to trade the draw, it’s even easier. Before kick-off, you place a lay bet on the draw, wait until the first goal is scored, and then place a back bet on the draw as soon as that happens.

In a typical football game, the odds that there will be a draw is around 3.5 – 4 prior to kick off. However, once a goal is scored, the probability of a draw happening increases as high as 6.0-8.0. The likelihood of a draw becomes less likely and thus the odds for winning increases considerably.

Again keep in mind that LTD will fail if the first goal is never scored. The odds that a draw will happen gradually but continuously decreases, which means a loss for the trader who has laid the draw.

Most bettors will restrict themselves to the standard factors to consider when to lay the draw. Such as:

However, this is readily available information and used by many. Predictology members are smarter than that and know that this is not the best way to find an edge. 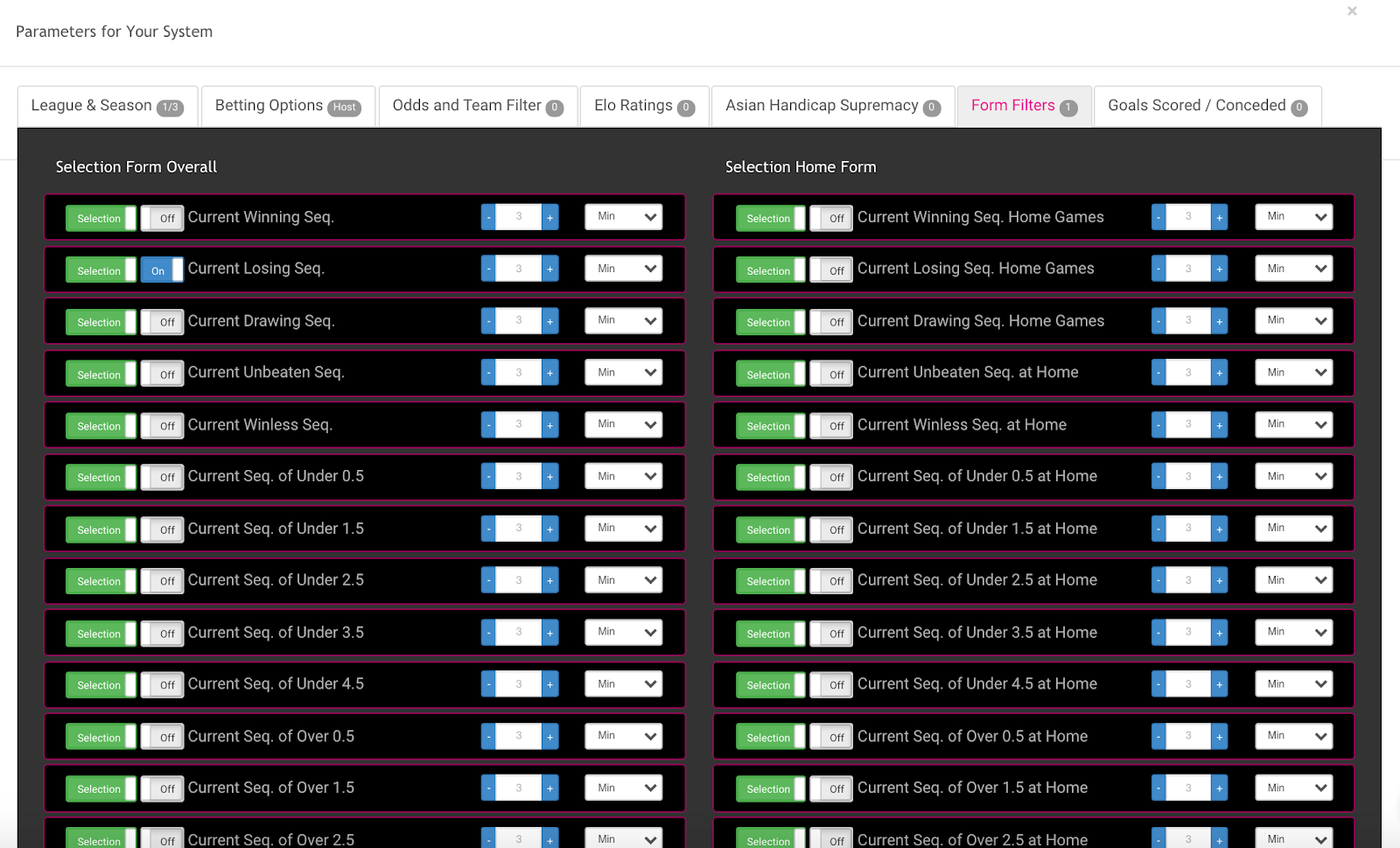 With Predictology, we can look to build strategies around 100’s of variables that the average Joe punter simply does not have access to. This is true for any strategy, not just Lay The Draw, but as that is our focus today, let’s start there.

Turning A LTD System Into The Perfect Trading Strategy

To develop the perfect LTD trading strategy, we first need to develop a profitable system for Laying The Draw over 90 minutes.

How you do this is entirely up to you, but I am going to walk you through the process by creating a system from scratch to meet our objectives.

For this, I’m going to use the Japanese J League.

The main European leagues have (finally) come to and end, or about to. While the J League is still in its early stages so should provide plenty of action in the coming months.

It’s also a league I quite like following as it’s usually on in the afternoons or evenings for where I am based currently.

I am going to base this on one filter for now. The filter I am going to use is Both Teams To Score – Yes, and I am going to set that to occuring in the previous four games, for at least one of the teams.

To put that another way, one of the qualifying teams previous four games must all have had BTTS – Yes.

My theory is a little contrarian in that if a team has seen such a high frequency of both teams scoring, it’s likely that that sequence will come to an end soon. While also suggesting that at least one of the teams is attacking and quite open (concedes and scores), so reducing the chance of a 0-0.

So we should at least see one goal, and our chances are fairly high that only one team is likely to score.

As we don’t have the exact betfair prices in the market, we use an internal algorithm that estimates the Betfair price when using a lay bet system. It’s actually remarkably accurate but I also like to use Maximum Odds, rather than Average Odds as an extra buffer built into the pricing.

I’m also going to se the maximum draw price at 5.00 so as to avoid any super strong favourites and lay the draw prices higher than we’d comfortably want to enter into pre-match 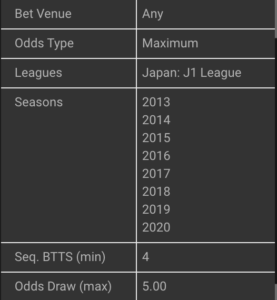 So there we have it, we have out initial parameters that we want to test our Lay The Draw theory on. Let’s take a look at how we got on.

Great! right of the bat we’ve uncovered a system on the first attempt with what appears to be significant potential.

To be honest, that’s excellent and we could just stop there. But we won’t because we can still make this even better, plus it would make this a very short article!

Our objective today is not to just simply Lay The Draw, we’re looking to trade the draw, as we know that the there is better value in laying the draw in-play. So what do we do next?

Pro Tip – Replicate The System On The First Half Draw Market

In Predictology we have the opportunity to focus on any number of betting markets – whether it be 1X2, Double Chance, Goals, as well as the half time 1X2 markets.

In this instance, when we have what looks like a profitable lay the draw system, I can now simply duplicate the system and run it against the Half Time Draw market. (Backing the HT Draw)

This gives me to benefits.

So these results are really interesting – remember, we have taken our LTD system, and applied it to BACKING the half time draw.

It actually makes a very small profit but certainly nothing that we’d actually want to spend time following.

BUT the key insight here is that by having quite a high draw propensity in the first half market, it suggests that the value in our Lay The Draw system is in the second half.

Remember, pre-match, we have an 84% chance that these games will NOT end in a draw. Yet, we have a 43% chance it will still be a draw at half time.

So, by waiting until half-time and only focusing on the selections where the match is a draw at that point (e.g. 0-0, 1-1, 2-2) then we are able to trade our selections at a much better price and increase our prospective returns.

To put that in context – laying the draw pre-match, you need a strike rate of around 70-80%, where as laying the draw at half time or in the second half, you only need to be right 55-65% of the time. You can also trade with higher stakes for the same liability, or risk less for the same return on a pre-match lay the draw.

What you could also do at this point is a little excel work. You could export the results for both versions of the strategy. Look up the games that were a draw at half time, then match them up to the same games in the full time results. You can then do your own offline analysis to see what proportion of those games had second half goals.

I’m not going to do that today as I’m already feeling very confident with these results. However, there is just one more thing that I want to check.

Replicate The System On The Over 0.5 Goals Market

The last thing I want to do is check out what the chances are of a 0-0 draw in these games. Obviously, this is very important for a lay the draw strategy as realistically, the only way we can lose is if the game has no goals.

Let’s take a look at how that compares with our model.

Our Lay The Draw Strategy

So here is what we know so far

We now have our Lay The Draw Trading Strategy. We will monitor any games that Predictology identifies on these metrics. We’ll wait until half time (or even mid-way through the second half). At this point we will lay the draw for 1 point stake, when the next goal arrives, we will trade out and lock in a profit of 50-70%.

Putting It In To Practice

I’ve ducked back into Predictology and run our LTD system to see if we have any up coming qualifying selections. (remember you can automate this and get instant alerts on your email) 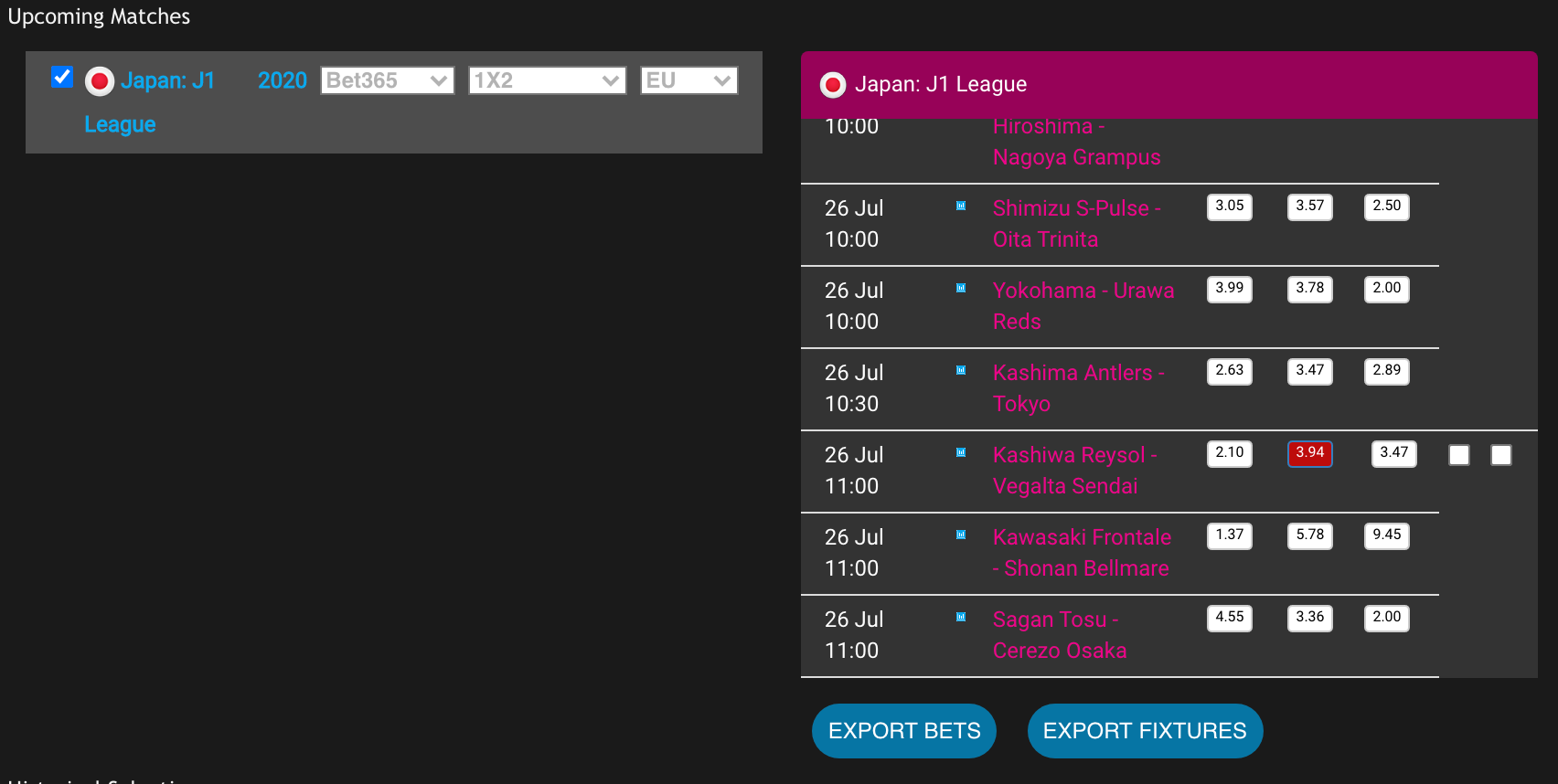 So as I’m writing this, we have one potential selection today.

11:00am – Kashiwa Reysol vs Vegalta Sendai

What I’ve done now is pull up Sofa Scores just check the pre-game stats for a sanity check. It’s unlikely I’d let these influence my decision as we’ve already covered our research above, but there is no harm in double checking things.

All looking good so far, with Kashiwa the likely winners.

Right, we’re game ready now and we just need to wait for the match and hope (at least for this example) that we have a draw at half time so that I can show you a live example.

The above was the Betfair markets a few hours before kick off and the odds on the draw were around 3/1.

Unfortunately (for our live example at least), the draw never looked likely with Kashiwa scoring mid-way through the first half, were two up at half time and ran out 5-1 winners.

I did have a back up selection which was generated from a personal modified version of the this strategy, which involved Shimzu S-Pulse against Oita Trinita, but again they were ahead at the break and the scores were never level again, running out 4-2 winners.

However, I was still keen to show you the trade in practice so I took a look at the other J League games taking place. The first interesting thing was that of the four games currently in-play, our pick Kashiwa was the only one with a goal, leaving three other matches all tied without goals at the break.

There were two that caught my eye in particular, with the first being Sagan Tosu – C Osaka,

Tosu had already notched up 5 shots on target in the first half and there had been 15 shots in total between them.

I checked the draw price and it was already down to 2.56 and I was happy to open a trade.

We didn’t have to wait long for a goal, as Tosu scored in the 50th minute. I did decide to wait a little bit to see how the match went and whether it looked like Tosu would get a second. However C. Osaka seemed to be coming back into the game so around 65 minutes I trade out for a 22% profit, which proved to be a very good idea, as Osaka equalised on 75 minutes.

The second match to catch the eye was the big favourite of the day Kawasaki, who were up against Shonan. Incredibly it was still 0-0 despite Kawasaki having 16 shots, 5 on target. However, the draw price was still around 7/2 at this point and too high to interest me. I did make a note to monitor the game through the second half.

Low and behold, Shonan took the lead on 58 minutes beut Kawasaki quickly equalised on 61 minutes. At this point the draw price had dropped to around 2.50 and Kawasaki still looked incredily strong (they ended up with 29 shots and 12 on target), and I was happy to trade the last half an hour in the belief that Kawasaki would complete the comeback. 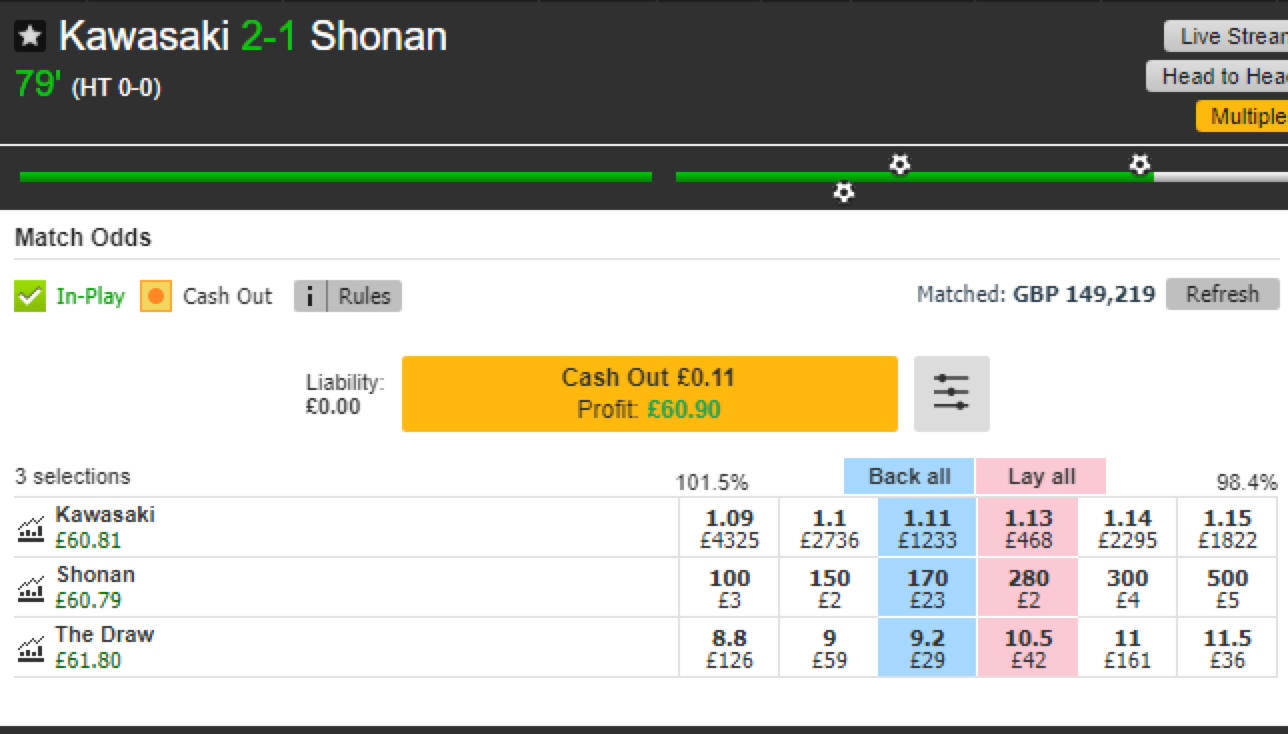 Kawasaki took the lead on 79 minutes and ended up running out 3-1 winners. So another 41% profit banked.

Neither trade was the one originally intended but it has hopefully shown you a couple of ways you can consider trading your lay the draw strategies all the same.

We hope you have enjoyed this two part guide to Laying The Draw successfully (If you missed part 1 of our in-depth looking at how to lay the draw profitable, you can read it here.) Please let us know any comments or questions below as well as any topics that you’d like us to cover in future.

8 thoughts on “Advanced Strategies For Lay The Draw”