Predictology Power Sheets 2: Having Fun with No Goals

Amidst the exhilaration of celebrating goals, we often forget that football is an inherently a low-scoring sport. The behind-closed-door era is producing its fair share of tedious matches to remind us of this fact. After an early glut of goals in the English Premier League this season, for example, we’ve been ‘treated’ to some appallingly bad matches devoid of meaningful action.

That said, the average goals per game in that particular league is roughly the same as in previous seasons. This isn’t the case in the English Championship, which, this season, has had approximately 0.4 goals per game fewer than in the past. 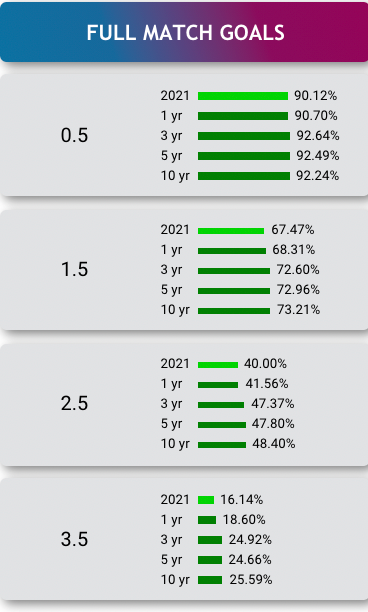 The Championship is significantly down on goals compared to previous years, with just 40% going over 2.5 goals

Throughout the world, there are many untapped opportunities to earn a profit by laying goals in a match or simply backing ‘unders.’

As mentioned in the first power sheets article, we have collected data from close to 14,000 games. Almost 9,000 of these matches offered odds on for over 2.5 goals at kick-off. What would happen if we chose to bet on under 2.5 goals instead? The famed over 2.5 goals wager is one of the most popular but doesn’t always offer great value. Maybe flipping the script could produce dividends?

For fun, the Predictology team ran a one-month trial across 30 leagues. We looked at games where the over 2.5 goals market offered odds of 1.99 or less and laid over 2.5 goals on all of them. Ultimately, the profit was in the four-figure range. The downside was the enormous level of variance, which would test most peoples’ resolve.

A better approach is to use the data found in our Power Sheets to see if we can discover profitable under 2.5 goal trends. As was the case last week, backing under 2.5 goals (or laying over 2.5 goals) offers odds of greater than evens. Remember to use fixed liability to ensure you’re only risking one unit at a time. 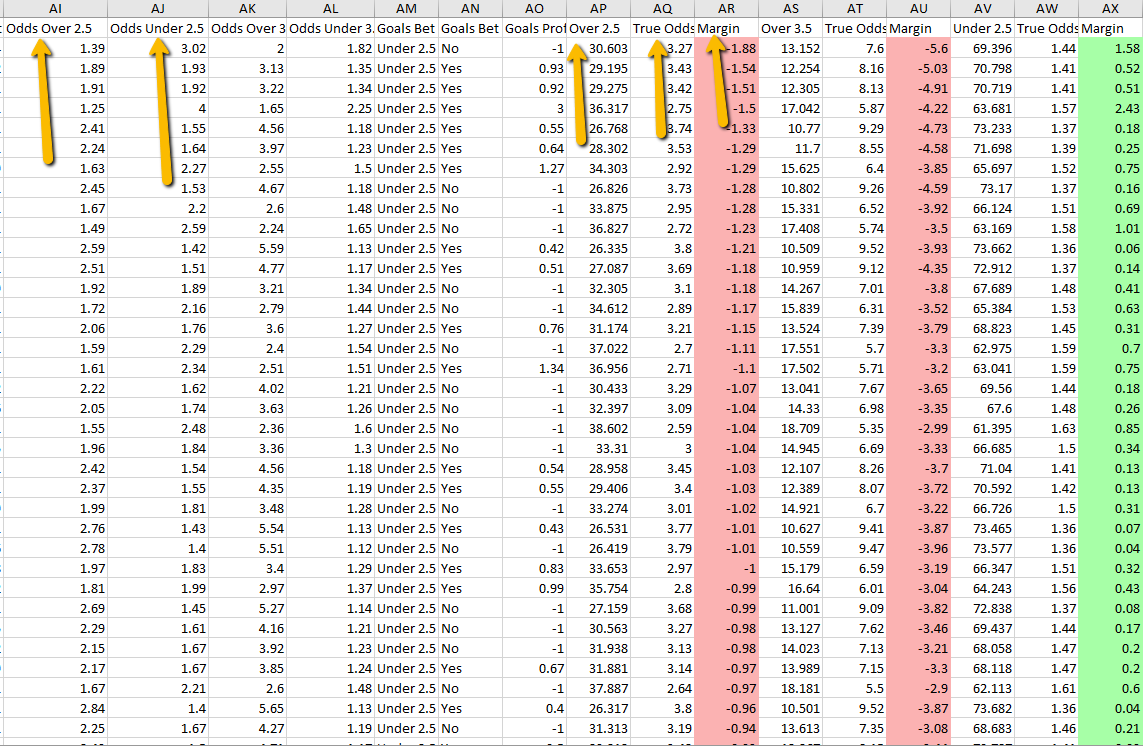 In the Power Sheets above, we exported three months’ worth of data from November 2020 to February 2021. There are over 6,100 matches in this spreadsheet. By scrolling to the right, you can see a host of information we didn’t mention in the previous article. This includes the over 2.5 and under 2.5 goal data.

The arrows point to the relevant over and under 2.5 goal information. You can also see the over and under 3.5 goal data if you wish. The odds in column AI are the average of what was available for that match. You can see that the first game on the list had odds of 1.39 for over 2.5 goals.

The numbers in column AP are what our software says is the real chance of over 2.5 goals. For the first game, it says there was only a 30.6% chance of the match having 3+ goals. This equates to true odds of 3.27.

The ‘margin’ column shows the difference between the bookmaker’s odds and what a value wager is. You can see that the margin is a huge 1.88, the largest across the 6,100+ game sample. It means that backing under 2.5 goals at odds of 3.02 provides you with a huge edge.

The game in question featured Juventus versus Ferencvaros in the Champions League. It finished 2-1 to the hosts, so the bet would have lost. Then again, Juventus only won in injury time, so you had a great chance to cash out for profit.

Should You Back Under 2.5 Goals at Odds Against?

This is the same bet as laying over 2.5 goals when the odds are 1.99 or less. We focused on matches where the odds for under 2.5 goals were 2.00 or higher. Almost 2,000 games fitted that particular criterion.

43.4% of these games had two or fewer goals. Blindly backing under 2.5 goals on all 1,956 matches where the odds were 2.00 or above led to 849 wins. Incredibly, the return was 1,962.94 units. Assuming all bets were made away from the Betfair Exchange, which means no commission, you would have earned a small profit of 6.94 units. Also, you should receive better Exchange odds to make up for the commission.

Yes, an ROI of 0.3% isn’t exciting in itself, though it is better than what you’ll get on a savings account these days! However, it provides us with an incredible starting point.

We decided to filter by the ‘Margin,’ but found something highly unexpected which outlines just how unpredictable football is at present. We expected games with a minus margin to prove profitable because they offered value. Instead, the win rate for under 2.5 goal bets dropped! This is largely because many of these bets were available at longer odds. 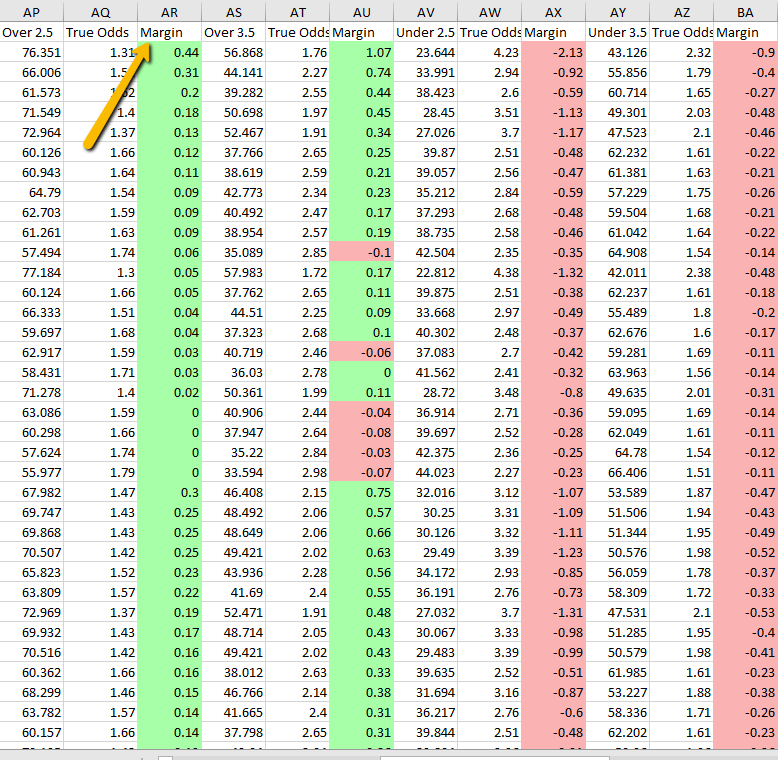 If you have the time, it is worth removing certain leagues and focusing on others. This is a fantastic way to find a profitable angle. For instance, only 36% of games in Austria’s top two divisions had 0-2 goals when the odds on under 2.5 were 2.00 or higher. This is over 7% below the average.

It is the same story as the Belarussian first division. While it only had 15 games that met the criterion, only three had less than three goals! By removing selected leagues, you’ll find that your win rate increases, along with the ROI. You’ll soon learn that specific countries have games with tons of goals, so it is best to avoid them for unders bets.

We ultimately removed Chile’s first division, the English Championship, Danish Superliga, France’s Ligue 1, Germany’s Bundesliga, and a few others. Without even completing the filtering process, we already brought the ROI up to almost 10%, with a profit of 108 units from 1,117 bets.

Final Thoughts on Backing Under 2.5 Goals

Once you have the data provided by Power Sheets, it becomes a question of learning how to utilise it. After several attempts at filtering using different criteria, we found that simply removing certain leagues was the best way forward. You can also do the same thing when looking for over 2.5 and over 3.5 goal bets.

In the next article, we’ll look at what we’ve learned so far and see how you can combine Power Sheets with the System Builder.