What is the “Gambler’s Fallacy”?

We’ve all been there: Sat at a casino table, a horse race, a football match or even watching the lottery and we say to ourselves: “Surely this run has to end”.

For example in roulette, if the ball has landed on red 10 times in succession, the majority of us are going to mistakenly believe that the next spin is more likely to be black; to break the streak.

Not quite the 50/50 (or 47.4%/47.4% as zero is green) angle that can be applied to roulette, but this also occurs in sports betting. “Benevento have lost their last 10 games in Serie A, surely they will break this streak today!”. However, it isn’t always (and is rarely ever) as simple as this…

In 1913 the “Gambler’s Fallacy” was born at the Monte Carlo Casino when the ball fell on black 26 times in a row! Yes, 26! During this sequence, players lost millions betting against the black ball under the impression that the streak was bound to end on the next spin. Professor David Hand, author of The Improbability Principle explained the phenomenon. “Observing a preponderance of heads among the first 10 tosses, many people expect to see this counterbalanced by a preponderance of tails in later tosses. But that’s not what happens. This misunderstanding is so widespread it has a name: “the Gambler’s Fallacy”.

Let’s use a coin toss for a more stripped back example. The likelihood of heads vs tails is 50/50 (presuming the coin in use isn’t able to land on it’s side). As the sample of coin tosses increases, the closer the result will be in reaching a true 50% for each side. To underline this, if we tossed the coin 10 times and it fell on heads 4 times and tails 6 times we would have a 40%-60% split with only ten tosses and a difference of two in the results. However, if we tossed it 20 times and we still had that difference of two (9 vs 11), the percentages would be closer to 50% (45% vs 55%) – this will narrow as the sample increases.

So how can we apply this to sports betting? Seldom is there a 50/50 likelihood in the outright match betting markets in football. Due to the nature of the three markets Win/Draw/Lose, bookmakers’ over-rounds will typically be in the region of 110-125% so having a ‘true’ split on likely percentage of outcome is rare, however the closest we can get is betting on the popular under/over 2.5 goals market.

Value can be found typically in backing under 2.5 goals in a fixture, and because sportsmen and women have memory could it be possible for us to capitalise on streaks that are easier to manipulate than a coin toss? A coin, dice or roulette wheel don’t have memories of past results, however with human error and human performance being crucial in sports betting it’s beneficial to explore ‘blindly backing’ a streak of results.

Blindly backing under 2.5 goals in each match in the English Premier League proves interesting reading. In the last eight seasons the average odds for backing under 2.5 goals in a fixture are at 2.o2 – around the 49.5% probability rate. As close as we can expect for a true 50/50 punt over a long period of time. However, the win percentage is at 54.4% along with a total profit of 37.94 units. 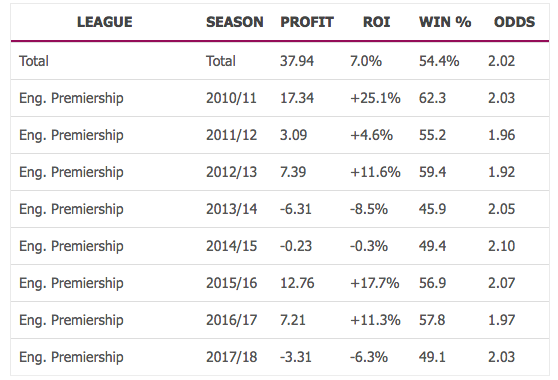 As the Premier League has evolved, each season has garnered different results in this market as we don’t get a steady increase in percentage. However due to the odds landing just slightly over evens, our profits reap the rewards across a long period of betting. 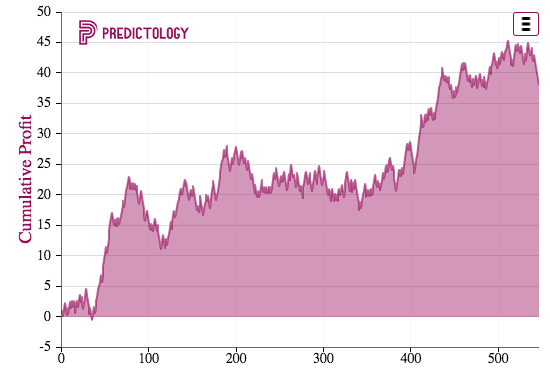 In terms of the “Gambler’s Fallacy” this is a prime example of using a near 50/50 outcome to your advantage in sport where as in reality a coin toss wouldn’t grant you the same profit over the same distance.

With betting systems, we are able to highlight potential markets where success can be found over a sustained period of betting with little regard for constant form alterations. In markets such as ‘both teams to score’ or ‘under/over 2.5 goals’, teams form per se won’t overly impact the results.

If you have any burning questions about the Gambler’s Fallacy – in fact if you any questions, burning or otherwise – then pop them in the comments section below and one of our lovely team will be sure to get back to you as soon as they can. Don’t hesitate, it’s what we’re here for.