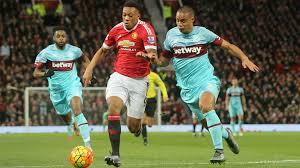 After a disappointing draw against Arsenal last week, Jose Mourinho’s men welcome West Ham to Old Trafford on Sunday and will settle for nothing less than a win to keep their fading title hopes alive.

West Ham have suffered their own dip in form recently and Slaven Bilic will be hoping that their good record against Man Utd in recent years will give his team the confidence needed to come away from Manchester with something.

Man Utd were dominant in their game against Arsenal but ultimately, they failed to take their chances and were left reeling after an 89th minute Olivier Giroud goal gave the Gunners a share of the points. This was Man Utd’s third consecutive draw at home, a poor run for a team expected to mount a serious title challenge this season.

United were without talismanic striker Zlatan Ibrahimovic against Arsenal but he should make his return to action on Sunday after serving a one-game ban for accumulated bookings.

Jose Mourinho is in desperate need of a good win here to relieve some of the pressure he finds himself under, and to add weight to his argument that Man Utd have simply been unlucky this season. They currently sit 6th in the league with a 5 point gap between them and 5th place Spurs.

The East London side have a strange season so far. After showing so much promise last year, it was expected that the Hammers were on the verge of special things with a highly rated manager, genuine world-class talent in the shape of Dimitri Payet, and a move to an incredible new stadium set to be the stage for an exciting season. But, as so often happens in football, things don’t always go according to plan.

West Ham have been poor this term with just 11 points from 12 games and Slaven Bilic has cut a frustrated figure on the sidelines as he struggles to work out what exactly has gone wrong. The Hammers finished 7th in the league last season but they will need to turn things around quickly if they hope to equal that this year as they are currently struggling in 17th place.

A look at the last 8 games for both sides shows two teams in poor form. Though Man Utd will argue that if they had scored the goals they undoubtedly deserved in games against Burnley and Arsenal, the story would be very different. West Ham had shown signs of improvement in October with a run of 2 wins and a draw but have since dipped again with 2 defeats and a draw in their last 3 league outings.

Somewhat surprisingly, West Ham’s recent record against Man Utd been good. We have to look back to 2014 to find the last time Man Utd beat the Hammers:

Let’s take a look at where the points have been won this season. As you can see, West Ham have only won 3 points away from home, a 1-0 at Crystal Palace. Though many have blamed their new stadium for the poor start to the season, it’s really their away performances which have cost them dearly.

Man Utd are clear favourites to take all 3 points from this one with the best odds on offer being the 1.48 offered by Pinnacle. West Ham are not fancied at all, Unibet offering the best value on an upset at 7.75 and for those who think West Ham will hold the Red Devils to a 4th consecutive draw at home, BetVictor are offering 4.75.

After a commanding performance in midweek against Feyenoord, United will be looking to follow that up with another victory against an out of sorts West Ham. Man Utd -1 on the Asian Handicaps looks the most likely route to profit here