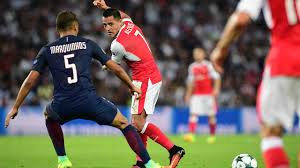 Arsenal play host to group A rivals Paris SG on Wednesday night in a crucial Champions League tie. The Gunners know that a win will almost certainly see them qualify for the knockout stages of the tournament in first place with a game to spare. If PSG win, they’ll take control of the group going into the final round of matches.

On Matchday 1, the two teams met in Paris and played out a 1-1 draw with Alexis Sanchez cancelling out Edinson Cavani’s early opener. Arsene Wenger’s men were lucky to escape Paris with a point that night but will be confident of a better result on home turf this week.

On saturday, Arsenal travelled to Old Trafford where a late equaliser from Olivier Giroud gave them a share of the spoils. They were perhaps lucky to win a point with Manchester United having the better of the play but the ability to grind out away draws against title rivals can make all the difference at the end of the season, especially following an international break.

Arsene Wenger’s men have a golden opportunity on Wednesday to settle Group A with a game to spare and qualify as group winners. This should in theory give them the opportunity to rest important players and also gain a favourable draw for the knockout phase.

They’ll be without Hector Bellerin who is still sidelined after sustaining an injury in the North London derby against Spurs but should be well equipped to face Paris who have some injury concerns going into Wednesday’s tie.

Unai Emery’s team remain 3 points off the pace in Ligue 1 after beating Nantes 2-0 at the weekend. However, the victory was overshadowed by an injury to Angel Di Maria who was withdrawn after opening the scoring. Emery said the decision to substitute Di Maria was precautionary and feels confident he’ll feature against Arsenal.

Javier Pastore was also taken off after sustaining a knee injury towards the end of the game and looks likely to miss out, with his club stating that he’ll undergo tests to analyse the extent of the injury.

Paris will be keen to come away from the Emirates with something to keep the group alive going into the final round of matches.

Arsenal and PSG are neck and neck in the Champions League, with only goal difference separating them. Domestically, both sides are also in decent shape; Arsenal remain unbeaten since the opening game of the season but have drawn 3 of their last 4 Premiership games. PSG have won 6 of their last 8 games in Ligue 1 which has seen them keep within reach of leaders Nice. More impressively, PSG have not conceded in their last 4 matches, evidence of a well-drilled defence. 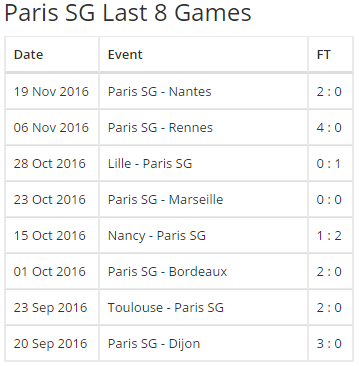 Arsenal go into Wednesday’s game as favourites with William Hill offering 2.30 for the North London side to get the win they need. PSG are 3.50 at Unibet to crash the party at the Emirates and Pinnacle are currently offering the best value on the draw at 3.49.

Based on current form and I’d have to put Arsenal as slight favourites but the draw still looks the most likely outcome. So we’re happy to be backing the longest odds of the three available, which is the draw at around 3.50