How to Make a Profit from First-Half Goals

The first-half goals market can be a lucrative market, when approached correctly.

The common belief is that there are significantly fewer goals in the first half than in the second, whilst this is true that second halves have, on average, more goals, the gap isn’t as large as you might think and the discrepancy is often not reflected in the odds.

As a result, we’d like to look at first-half goal betting options with Power Sheets. We discovered that looking at home sides with a high percentage chance of scoring according to our AI bore fruit.

Over 0.5 First Half Goals

Once again, we use our three-month sample, this time with almost 6,400 games. Unfortunately, we don’t have the live odds for the first-half goal bets like we do with other markets. We can tell you that approximately 66.5% of games had at least one first-half goal. Backing this market blindly would certainly result in a loss, as you would need odds of at least 1.50 to break even.

We have a ‘baseline’ strategy that has yielded great results. It focuses on matches where our AI suggests the home team has at least an 80% chance of scoring a goal. This metric is an extremely useful indicator of early goals. Logically, if the hosts are highly favoured to score at least one goal, it could happen relatively early. 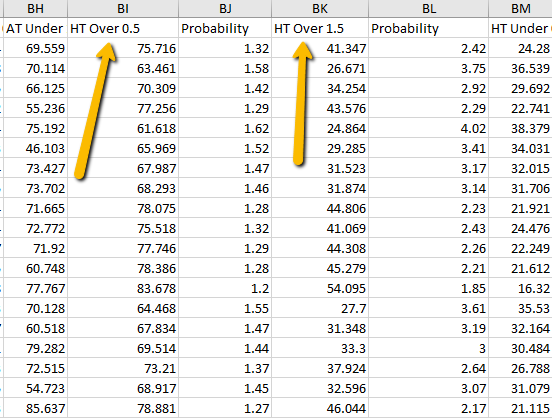 There were over 1,500 games that had at least an 80% chance of the home side scoring a goal. Overall, approximately 70% of these games had one or more first-half goals. This is an increase of 3.5% on the initial figure.

If you have more patience, you could wait for games with a 90% chance of the home side netting a goal. In this case, there were 172 examples on the sheet with a first-half goal in 78.5% of the matches. This means you would break even with average odds of around 1.28.

In games with a heavy favourite, you may not get such odds at the beginning. However, you could go to the Betfair Exchange and place a wager on over 0.5 goals at, say, 1.36 or whatever margin you’re seeking. In many cases, your bet will get matched after a few minutes if the game remains scoreless.

What About Over 1.5 Half-Time Goals?

In the 2020/21 season, almost 36% of games had over 1.5 first-half goals in the English Premier League. In contrast, 41.5% of matches had over 1.5 second-half goals. Again, there is a huge discrepancy in the available odds.

In our huge data sample, only 29.6% of games had over 1.5 half-time goals. We like to focus on games where the chances of the home side scoring 2+ match goals are at least 50%, according to our AI. Again, make sure you are getting value by comparing the AI odds to what the bookmakers offer.

Filtering in this fashion cut the sample size to approximately 1,260 bets, and over 35% of these games had at least two goals by halftime. Again, according to our AI, you can always move upwards and focus on matches where there is an even higher chance of the home side scoring goals.

There were 402 games with at least a 60% chance of the home side scoring 2+ goals. An impressive 39.55% of these matches had two first-half goals. You would need average odds of 2.53 to break even. When we went to 70%, we found there were only 113 possible bets. However, these games had an incredible record. Almost 55% of them had over 1.5 halftime goals!

Is it worth filtering more and going to 75%? There were only 45 such matches across three months. This brought the win percentage to 60%. It is up to you to decide if you want a slightly higher win rate but fewer bets. The 70% filter would give you an average of at least a bet a day, and you would only need average odds of 1.82 to break even.

You can also consider combining these filters with other data points, such as Both Teams To Score expectancy, to further increase your strike rate and profitability.

You will find that the Predictology AI does a fantastic job of helping you narrow down the field regarding finding the best games for first-half goals. Once again, please remember to ensure that the odds on offer represent value compared to what our AI suggests. A margin of at least 10% should provide you with a decent bank building option. 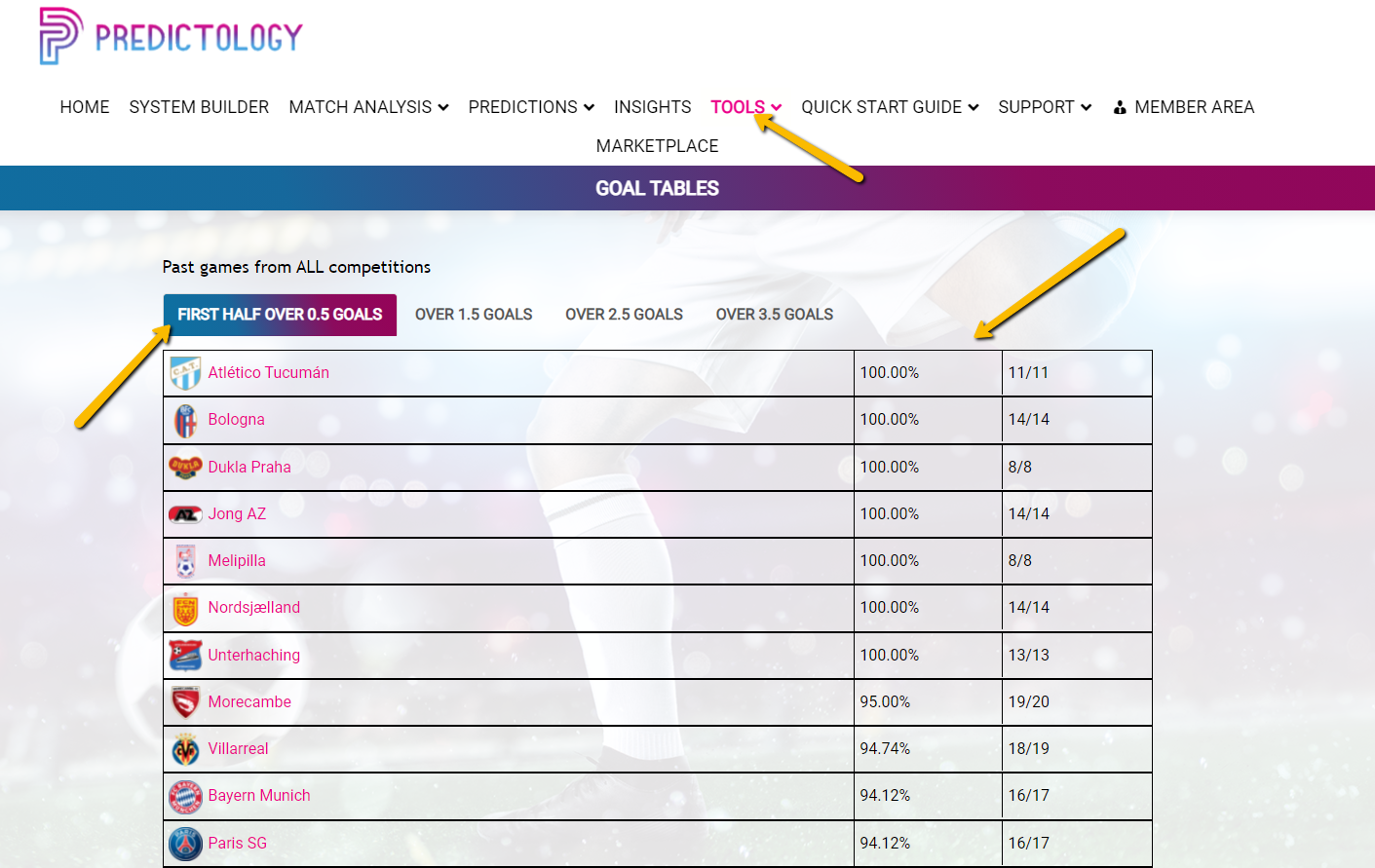 Finally, you can go to the Tools section in your Predictology account and click on the ‘Goal Tables’ tab. Here you get to see teams with great records of being in games with at least one first-half goal. You can also see teams with an excellent recent history of involvement in matches with over 1.5, 2.5, and 3.5 goals.

Remember you can also combine these filters with other metrics, such as Both Teams To Score Expectancy, to further increase your chance of finding a high strike and profitable model.

If you’d like to read more on this topic, then we recommend you check out another of our posts, which looks at the different ways that you can trade the first half goal markets.