Your Complete Guide To Betting And Winning In The English Championship

The English Championship, the second tier, has a deserved reputation for being one of the world’s toughest leagues to predict. It is a 46-game slog involving 24 teams. There are usually several high-quality sides capable of making the step up to the Premier League. The level of competition is such that only a handful of teams win even half of their fixtures.

In recent times, there have been a few ‘yo-yo’ clubs. These are sides that make it out of the Championship, only to get relegated from the Premier League in the next year or two. Then they get promoted once more, and the process starts all over again! West Brom and Fulham are examples of recently relegated sides that are back in the top flight.

There will be a focus on Watford, Bournemouth, and Norwich City, who were all relegated to the Championship last season. However, the early-season form suggests that, as usual, there are plenty of teams with promotion prospects.

As unpredictable as the English Championship often is, finding the right data can help turn things to your advantage.

Looking for more? Read Part 2 of our guide to betting an trading the Championship 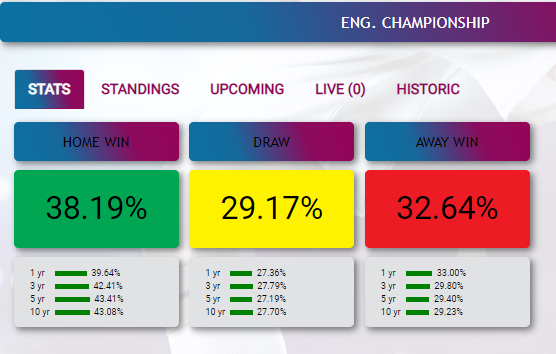 In the 2020/21 season to date, there is only a slight level of home advantage. However, home teams are starting to pick up the pace. A few weeks ago, the away win percentage was higher than the home one. Even so, the current win rate for hosts is over 5% lower than the 5-year average.

What you’ll notice is that few Championship matches feature a team that is odds-on. When you see such a side, it is worth analysing the match to see if it is worth laying sides at short odds.

All teams have played at least six home fixtures this season so far. However, incredibly, only four of the 24 sides have won more than half at the time of writing! FIVE teams have managed only one home win, and Derby have no victories at their ground. Then again, only seven teams have won 50+% of their away games.

This is a common theme in the Championship, though. Last season, only three sides won more than 50% of their home matches. Leeds and Fulham earned promotion, while Brentford narrowly missed out.

On the flip side, you might catch bookmakers overcompensating. It is normal to see home teams in the Championship available at odds of 3.20 and higher. This happens even when evenly matched sides compete.

Are There Any Useful Goal Trends?

Yes, as it happens. While the Premier League began with a flood of goals (although that has dropped off significantly in recent weeks), it has remained a trickle in the Championship. With slightly more than one-quarter of the matches played, the English Championship is one of Europe’s lowest-scoring leagues with just 2.19 goals per game. Last season, it was 2.64.

There are a couple of things we can do with this information.

Logically, with games having exactly two goals more frequently than normal, there is potential for profit backing overs. The bookmakers know that games are low scoring right now. As a result, you can expect to get pre-match prices of 1.4 or 1.5 for over 1.5 goals.

It, therefore, makes sense to target slow-starting teams. At the time of writing, games involving the following sides have a maximum of two goals in the opening quarter of an hour this season:

There hasn’t been a goal in any of Luton Town’s games in the first 15 minutes! Some of these teams are rather low scoring in any case. It is certainly worth keeping an eye on these slow starters. You can wait a while for better over 1.5 goal odds.

Alternatively, consider backing under 2.5 goals (or laying over 2.5 goals, which is the same bet). In general, the odds of under 2.5 goals are 1.66 or thereabouts for many games. Blackburn are the fastest starters. Almost 40% the goals in their games so far have come in the opening 30 minutes.

The Championship does correspond to some ‘norms.’ Almost 57% of goals are scored in the second half, and by far the highest proportion of goals (almost 27%) come in the last 15 minutes. Even low-scoring games can provide some late drama. By the way, the 15 minutes after half time is the next best segment for goals, accounting for 17%.

This is a longer odds proposition but a useful one nonetheless. Remember, approximately 31% of games this season to date have yielded two goals exactly. That means you can back 1-1, 2-0, and 0-2 scorelines for better wins.

The 1-1 draw is by far the most common scoreline in the Championship. It has been the final score in over 17% of games! This compares to 13.5% last season. This means the average round of fixtures will have two games that finish 1-1.

So far, around 42% of games have ended 1-1, 0-1, or 1-0. Dutching these scorelines is worth consideration. You always have the option of trading out if you think a game is likely to have more goals.

If you think an away side is good value, backing 0-1 or 0-2 could bear fruit. If you believe it will probably be a tight game, backing 1-1 is possibly more lucrative than opting for a basic draw bet.

In part 2, we outline how you can use Predictology to win in the English Championship.

Please note that games happen thick and fast in this league. There were several more matches scheduled the evening after I wrote this. As a result, the data will change very slightly by the weekend!

Looking for more? Read Part 2 of our guide to betting an trading the Championship