Barcelona and Real Madrid remain the standard-bearers for La Liga. One of these two giants has won the title every year since 2004, barring Atletico’s remarkable triumph in 2014. While Barcelona have had the better of it in recent years, Real have won four Champions Leagues in the last seven seasons. Los Blancos also regained the La Liga title last season.

While Real have started the league season reasonably well, sitting in fourth place at the time of writing, Barcelona have endured a disaster. The Blaugrana have dropped 10 points in seven matches. They are 9 points behind surprise league leaders, Real Sociedad, albeit with two games in hand.

Real are in contention to retain their crown, but could Atletico launch a challenge? El Atleti have enjoyed an excellent start to the season and are near the top with games in hand. In a La Liga season that’s more open than usual, let’s see if there are any trends to watch out for.

A Slight Loss of Home Advantage 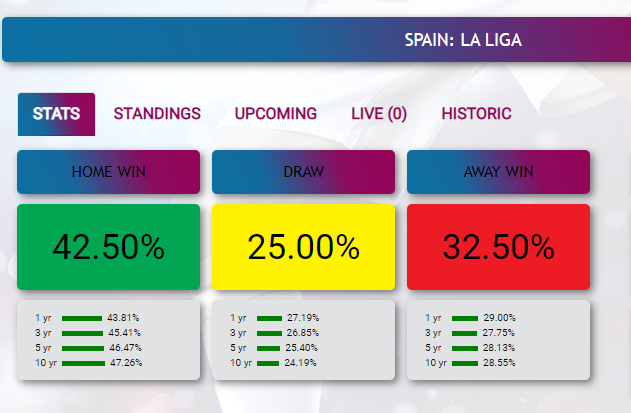 As always, it is worth looking at the impact of no crowds to cheer on the teams. In La Liga so far, there is an almost 3% drop in home wins compared to the three-year average. The number of draws has fallen too, with away wins increasing by almost 5%.

Immediately then, punters should keep an eye out for overpriced away sides. Eight La Liga sides have a home win rate of 25% or less. Four sides have yet to register a home win. In fairness to Levante, they have only played three home games. In contrast, Eibar have gone five without a win at home. At the other end of the spectrum, Villarreal, Granada, and Atletico have performed well in their respective stadia with no fans.

Away wins are relatively well spread out. However, only seven teams have won more than a single away game. Each side has played at least three. Cadiz are surprisingly good on the road with four wins out of five. Meanwhile, they have managed just two points from their four home games!

Overall, La Liga is averaging 2.41 goals a game. Last season, that figure was 2.48 goals. There is little difference between the over 1.5 goal and over 3.5 goal statistics. However, while 46% of games last season had over 2.5 goals, only 40% of matches have achieved that feat this season.

Last season the average for the home team was 1.44 goals per game. This season, it is just 1.31 goals.

In what is becoming a pattern in most European leagues, La Liga saves its action for the end of the first half and the end of the game. Over 20% of goals come in the 31-45-minute period. This is a big increase on last season’s 15.7% figure.

>>> How to bet and trade the first half

In 2020/21, Eibar and Huesca are the teams to bet against in the latter part of the first half. Huesca have scored once and conceded six in this timeframe. Eibar have scored two and conceded five. For reference, only ten goals were scored in 38 Eibar games last season during this period!

Eibar have made for a great trading option in the first half so far. There has only been a single goal in the first 30 minutes during their nine matches! Then a relative avalanche comes before HT.

Villareal have also performed poorly at this point of matches, scoring twice and conceding five. Indeed, over one-third of their games’ goals so far this season have come during these 15 minutes.

Predictably, Real Madrid are strong in the final 15 minutes plus stoppage time, outscoring opponents 4-0. They only did so by a scoreline of 15-10 last season. There have also been four late goals in Barcelona’s seven matches so far, three goals for them and one for the opposition. Barca scored two of these late goals in their last La Liga match.

Real Sociedad, the early pace setters, have relied on late goals to stay on top. They outscore opponents 6-1 in the final 15 minutes. 13 of the 20 goals they have scored have come in the second half.

It is early days in La Liga, so it is hard to say if Sociedad will continue to dominate the second half of games. However, there is potential for Atletico Madrid to make another bold bid for the title. Luis Suarez has started well for his new club, and if he can keep up his form, El Atleti may make another dent in the supremacy of the Big Two.

In part 2, we check out the most relevant trends and check for any interesting bets for the next round of La Liga fixtures.