Guide To Trading & Backing Under 2.5 Goals

The vast majority of us watch football for entertainment purposes, in the hope of witnessing a classic seven-goal thriller like the memorable Liverpool vs. Newcastle game in April 1996. That said, I’m sure we can all recall a time (or multiple) when we have settled down for a match only to be left dismayed by a lack of goals. Catenaccio lovers aside, football fans want goals!

Alas, football is, in general, a relatively low scoring sport. For instance, the 2019/2020 English Premier League featured an average of 2.72 goals per game. Moreover, only Liverpool, Manchester City, and Chelsea had goal averages of over 3.00 in their matches.

A significant number of punters prefer to bet on a game having goals. For some, there seems to be a psychological block with regards to backing the ‘under’ markets. There is a constant fear of a goal being scored. This is also in contrast to our natural desire to hope for goals. Yet the data suggests that backing under 2.5 goals is a solid bet, and there are ample opportunities for value bets.

In last season’s English Premier League, half of the 20 teams were involved in under 2.5 goal games at least 50% of the time. Only 11 of Sheffield United’s and Crystal Palace’s games had over 2.5 goals! If you had backed under 2.5 goals all of these games, you would win 71% of the time. Converting this percentage into odds would mean you would only need a price of 1.41 or better each game to theoretically profit. 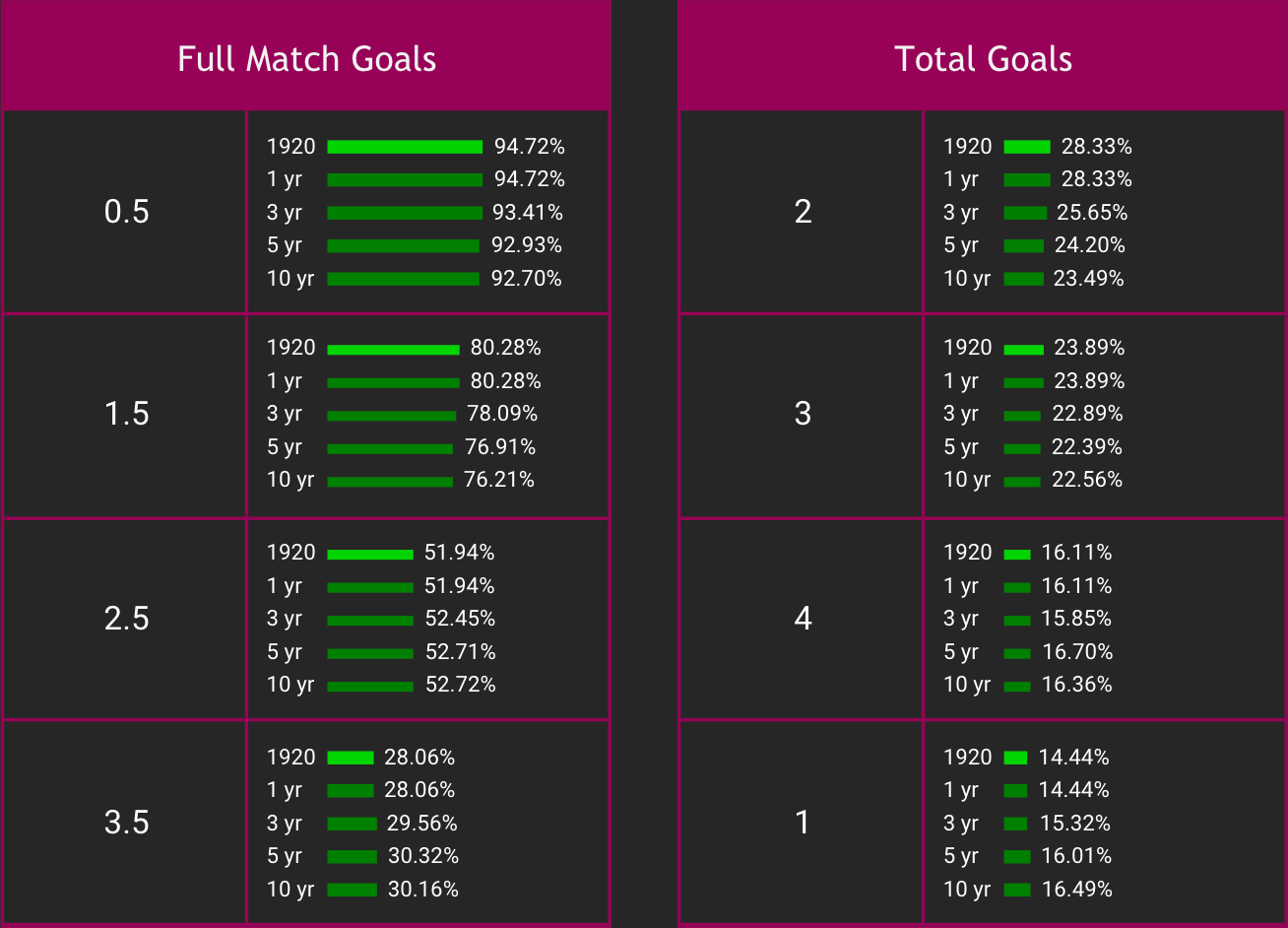 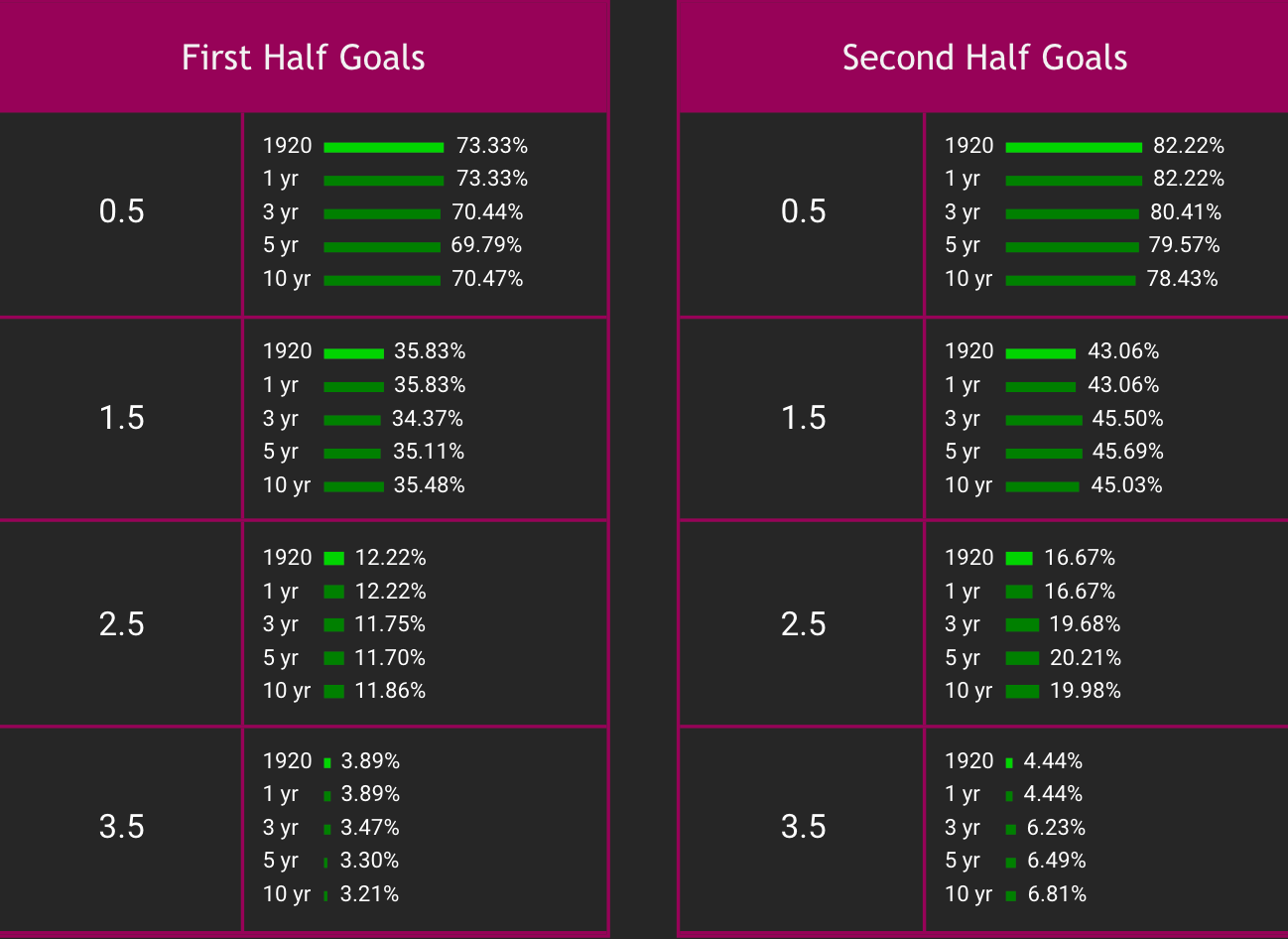 Going against the market is usually the smart play when it comes to betting and trading. Under 2.5 goals is a perfect example of this due to the publics general propensity to will and bet for goals, meaning there can often be significant value available opposing these trends.

The most obvious tip is to find specific teams or leagues where under 2.5 goals are common. The Argentina Primeira Division is a prime example of a ‘cagey’ league. In the last 12 months, 61.15% of games had under 2.5 goals. Across a 10-year period, 62.36% of games have had two goals or less!

Despite this fact, only 9.08% of games finished goalless in 2019/20, though that figure increases to 11.42% across the last ten years. As an aside, this suggests that backing under 2.5 goals after a goal in the first 20 minutes is a trading strategy worth looking at in Argentina’s top division. 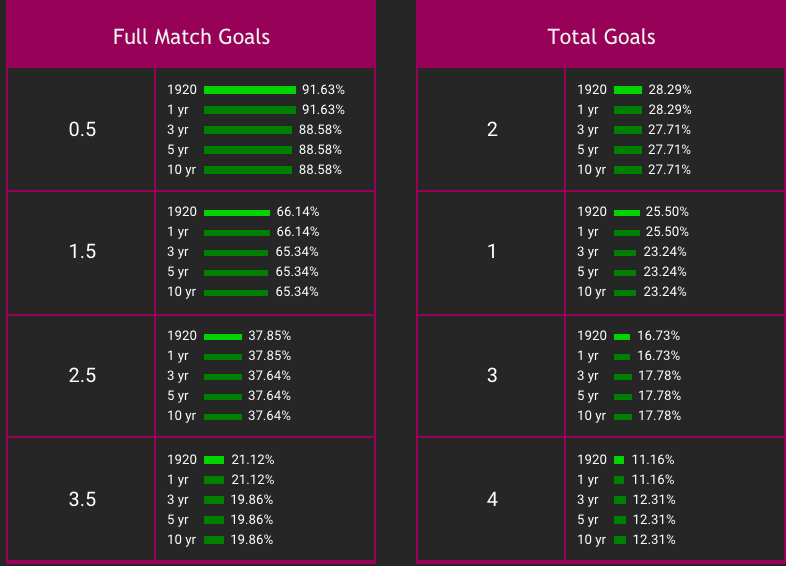 You can also look for specific teams. Have a look at the percentage of games with under 2.5 goals in Argentina involving these teams:

Another six teams had under 2.5 goals in 70% of their games. On the other side of the coin, Arsenal Sarandi and Godoy Cruz were involved in under 2.5 goal games only 43% and 48% of the time, respectively.

You can find full stats from dozens of leagues on Predictology including our AI driven match prediction engine here.

Strategies for Backing and Trading Under 2.5 Goals

As I mentioned above, it is worth looking at teams in low-scoring leagues with a propensity for getting a relatively early goal. In 23 Argentinos Jrs games, only 39 goals were scored in total. However, 7 were scored in the first 15 minutes, 14 in the first 30, and 21 goals by half-time. If there were an early goal in one of their games, unappealing odds would suddenly become a lot better.

Only 3 of the 41 goals in Velez Sarsfield games were scored in the first 15 minutes. However, there were 11 in the 16-30 minutes period, 10 of which Sarsfield scored. A team with such stats is probably best avoided when looking to back under 2.5 goals. That is unless you use one of the following trading methods.

One of the great things about backing under 2.5 goals is that you can trade out for a profit early on. One of the most common tactics is to place the bet close to kick-off, or right after the first whistle. As the match progresses, the odds of under 2.5 goals will decrease as long as no goals are scored. 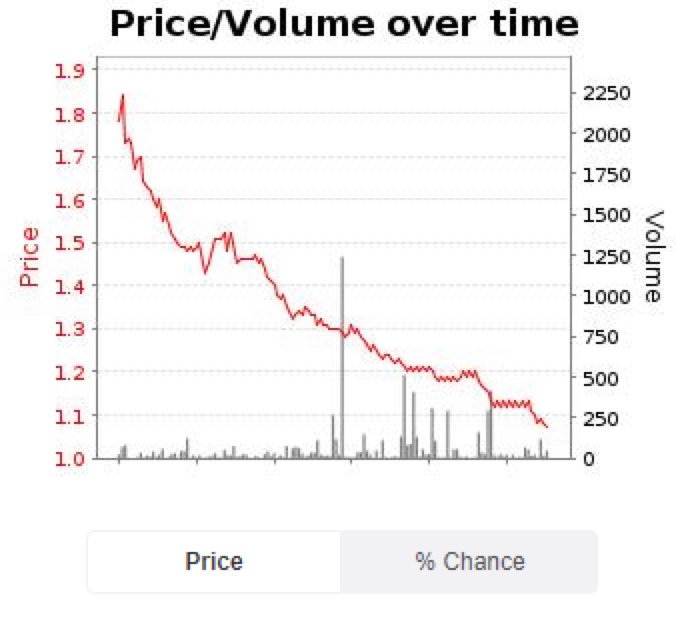 The above chart shows the price decay on under 2.5 goals in a match in Mexco from just before kick off until the 25th minute. If trading under 2.5 goals in the first 10 minutes of the game, it’s possible to lock in 5-10 ticks profit if there are no goals during that period

Interestingly, right after I took that screenshot, there was two goals in quick succession and it gives us a great example of the impact of a goal (or two). 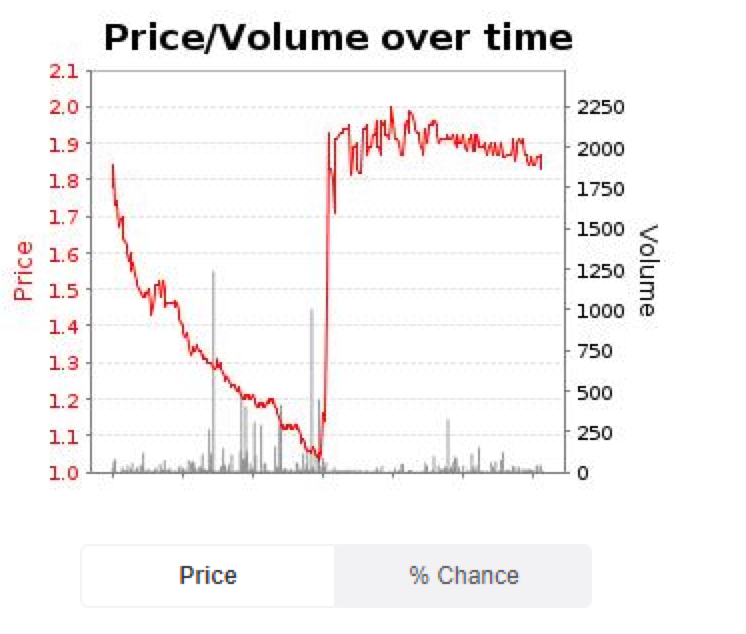 You’ll notice that because both goal came midway through the second half, the price on under 2.5 goals is still pretty close to the price it was pre-kick off. Conversely, if you can time your entry before the goal you could have laid at 1.10 and backed out again at around 1.90 for a very decent profit – but that’s a story for another day.

Going back to the Argentinian top flight for a second, games involving River Plate had just 2 goals in the first 15 minutes. Therefore, in 21 of their 23 games, you would probably turn a profit. Of course, such winnings are likely to be small.

However, even in potentially low-scoring games with an early goal, your bet isn’t necessarily doomed (as noted above). If there are no further goals by the 35-40 minutes mark, you may find that you can break even. For reference, only 23.6% of games in Argentina’s top division had more than a single half-time goal last season.

Another strategy is to place a back bet on under 2.5 goals and place small lay bets throughout the match. You can do so according to time if you wish. However, if you have the betting software, you can set it to place lay bets according to specific odds. For example:

Of course, your plans can be damaged anytime a goal gets scored (but not always irreversibly when taking the right measures). In this scenario, it helps if you actually watch the game. If you see a fast start and the odds don’t change much, it can be best to cash out early in case an early goal arrives.

A variation of this strategy that I use fairly often is that if an early goal scuppers my original plans. I’ll consider going back in again on the inflated odds for Under 2.5 and continue the same process above, with adjusted exit points.

When there is an early goal, the odds for under 2.5 goals should increase significantly. You can let it ride, or allow time decay to provide a relatively quick-fire profit. In games involving low-scoring teams, it is relatively rare to see two goals in rapid succession.

Pro Tip – if you want to forecast where the odds might move to on a goal. Look at the odds for the next market down in the sequence. So if you are looking at Under  2.5 goals and want might happen if there is a goal, look at the Under 1.5 price, which is usually a good indicator of where it will settle

Pro Tip 2 – if there is a goal in the first half, but no further goals. The price for Under / Over 2.5 will usually return to something resembling its pre-kick off price. In simplistic terms, on average there is one goal in the first and two in the second half. So by reaching half time with just one goal scored, you are actually back in line with the averages and the odds will normally reflect this.

Here’s another quick tip to potentially help mitigate your losses. The early goal can be a killer for most under 2.5 goal strategy. However, you can take advantage of the mass panic that will ensue. You can bet that many other traders will close out of their position quickly. Rather than following suit, wait for a couple of minutes. You will likely have a better cash-out opportunity after a vast array of traders leave the market and cause a noticeable price movement.

In general, the under 2.5 goal market is an excellent opportunity to achieve a high win percentage. It is also ideal for those hoping to perform quick trades.

15 thoughts on “How To Profit For Boring Football Matches”