Today, and over the coming weeks, we are going to use the micro betting strategy concept and apply it to individual teams – today it’s the turn of Man City. We will analyse and inspect various angles for making money solely by betting on Manchester City under certain conditions.

So how do we make money betting on Man City?

Man City have blown the Premier League apart this season with their attacking flair and tactical nous – courtesy of Pep Guardiola. With a comfortable lead at the summit of the English league, City’s sublime form has been underlined by the amount of goals they have scored. With a plethora of attacking options, ‘The Sky Blues’ have torn teams apart in emphatic style across all competitions. In the Premier League alone they’ve netted 79 goals. To give that some context, the much-lauded attacks of Liverpool and Spurs have bagged 65 and 53 respectively.

So can we make money on Man City by backing them to win at home?

Due to City’s ruthless form, it is safe to assume that value will be hard to find in backing them blindly to win this season – particularly as things have progressed. This is confirmed through using Predictology to find the average price available for a home win this, with the figure coming out at a miserly 1.29 (well short of the average price when looking at the previous five seasons).
With a home win percentage of 92.9, you would expect a higher ROI (return of investment) than +19.8%, so with a City home win becoming a true ‘banker’ this campaign, it would be wise to forage deeper to find value in Pep’s men.

Can we make money on betting on Man City matches to contain over 2.5 goals at home?

Let’s look at a market tailor-made for Man City’s attacking flair – over 2.5 goals. Over the last five seasons the average odds offered for over 2.5 goals in a Man City home game are 1.57 (slightly better than 1/2), with sustained betting over a period of these five seasons we can begin to find consistent value and returns, with only three small dips in cumulative profit under the break even line. 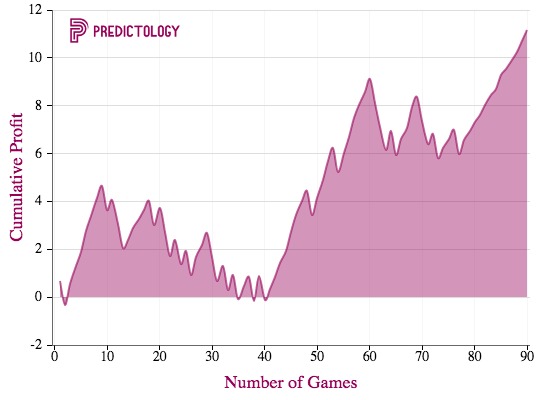 A team like Man City who play with flying wing backs are always going to be capable of high scoring games; this coupled with City’s attacking prowess enables the over 2.5 goals bet to look a comfortable sustained bet. City either blow teams away, or have to rally to turn around a match not going their own way. With that 92.9% home win rate referred to earlier, any game that City concede in and they win… three goals must have been scored. This is where the over 2.5 goals backing benefits.

How about away from home?

Despite City’s dominance this season they have still conceded 20 goals. This isn’t a particularly huge total, but once again as we are assuming City will win a majority of their matches, a match in which their opponent scores will typically involve over 2.5 goals.
With an average of an increased price of 0.15 for an away game, the over 2.5 goals market can once again prove profitable.
Over the past five seasons we can see a 5.4% ROI as well as a 4.79 profit, and where we see the seasons that lose profit it’s only a slight dent when comparing to the gains made in the lucrative seasons. 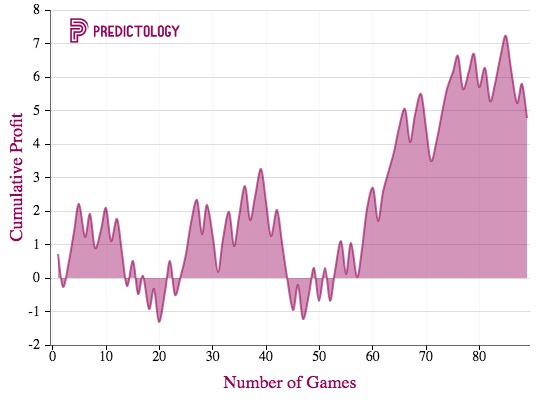 Despite the decrease in win percentage by 25.1%, our cumulative profit is sitting on a steady peak after a profitable 2016/17 season. With City continuing to fight for the two major prizes after bagging the League Cup, rotation of defence is likely to lead to further leaks in defence, leading to another O2.5 goals in the above graph.

So what have we learnt about Man City betting systems?