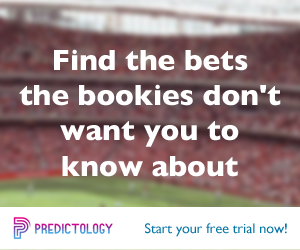 Premier League data crunched from the last 7.5 seasons shows that teams on a run of four or more without a win at home are able to keep all three points in their next game 43% of the time.

That’s a significantly better percentage chance than the bookies are giving West Brom to beat Spurs at the Hawthorns on Saturday and as such, a price of 8.0 with Bet365 looks too good to ignore, despite the gulf in class between the two sides.

Stoke’s home form has been very un-stoke-like this season with relegation from the top tier now staring them square in the face. Opponents this weekend Crystal Palace were in the basement dog fight themselves not so long ago though and their away form doesn’t make impressive reading – they’ve only won one in their last eight on the road. A Stoke win is 2.72 with Marathon Bet.

Leicester City haven’t won at home since February but if there’s one team in this league capable of a total no-show when the time suits them – West Ham are that team. They’re coming off the back of successive 4-1 losses to Man City and Arsenal. The ex-Premier League champs (still feels weird saying it) are priced at 2.3 with Bet Victor to keep all three at the King Power.

Staying in the Premier League, and to the charges of one-time undefeated England Manger Sam Allerdyce. Big Sam was appointed at Everton with the primary objective of keeping them in the Premier League. He’s done that with ease and the Toffees now sit in eighth although even he might admit that league position is slightly flattering.

Unlike their free-scoring visitors, Everton are not setting the division alight up-top but they’re well organized and hard to break down. For those two reasons specifically, they’ve now gone four games without seeing over 2.5 goals.  Teams on a run of three or more without seeing at least three goals, have gone to play in an “overs” game 50% of the time over the last 6.5 seasons. O2.5 goals in Everton v Southampton is 2.2 with Matchbook.

Staying with that market and our final English-based tip of the week comes in the form of Huddersfield Town. They’ve now gone a massive seven games on the low side of 2.5 but if there’s one team that can tip them over the line (and some) it’s this season’s champions.

Over the Chanel to France now and only one team in the division hold the rather unenviable record of going four or more games without a home win.

Over the last 7.5 campaigns, backing a reversal of form for winless-in-four sides has yielded a 4.9% ROI, with a win percentage of 39%. That percentage rises to 43.% if you focus on this season alone.

Metz are on said run but will take some confidence from the fact that they’re drawn three of their last four at home. Bet365 have priced the home win against Angers at 2.75.

Over to Italy now, and 6.5 season’s worth of data taken from the top division reveals that teams on a run of four or more home games without a win are able to turn that form around 39% of the time.

SPAL are winless in four at home but they have drawn three of those games and won last week away at Verona. William Hill have priced the home win against Benevento at 1.53.

We’re rounding things off in Spain now but keeping focus on the Over 2.5 Goals market.

Analysis (6.5 season’s worth) shows that Spanish teams on a run of three of more games seeing under 2.5 goals, go onto cross that line 50% of the time in their next game.

It is these statistics that need to be relied on if you want to pick O2.5 Goals in the Girona v Eibar fixture (2.29 with Marathon Bet) because the form book isn’t going to tempt you!

Each of Eibar’s last four games have finished either 0-0 or 1-0 whilst their opponents have seen two or less goals in their last five consecutive home matches.

Paying around 6.65 for the treble with BetVictor