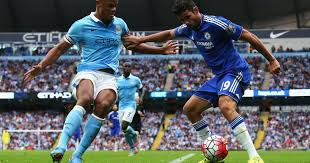 On Saturday, league leaders Chelsea travel to Manchester City in a massive premier league clash between two teams who will hope to be vying for the title come the end of the season.

Antonio Conte’s Chelsea side have been in formidable form recently and a win in Manchester would make it 8 consecutive wins and extend their lead over third placed City to 4 points.

Man City are starting to find their own form after a blip in October which saw them take just 2 points from a possible 9. They could overtake Chelsea with a home win in what promises to be a tight game that many are finding tough to call.

At times this year, Pep Guardiola’s City side have been scintillating. When they get it right, as in the Champions League win over Barcelona, they’ve looked world class, but a few puzzling results against weaker opposition has tainted their season so far.

City will hope to welcome back the impressive Raheem Sterling who picked up an injury in the 2-1 win at Burnley and also in contention for a return to first team action are Kevin De Bruyne, David Silva and defender John Stones.

Pep Guardiola has adapted well to his first season in the Premier League but whilst showing glimpses of the quality that his famous Barcelona and Bayern Munich teams possessed, he has yet to find a formula that produces consistency. City have drawn their last 3 home games and will be  desperate for 3 points and a good performance against a team who already look like serious title contenders.

Simply put, Chelsea have been outstanding in recent weeks. Antonio Conte is a headstrong manager but has shown the ability to adapt in order to effect change. His switch to a 3-4-3 formation has propelled Chelsea on a brilliant 7 game winning streak in the league which has seen Chelsea play some beautiful attacking football along the way.

A key part of this run has been Conte’s faith in his players. Almost unheard of in the modern era, Conte has started the same 11 players in the last 7 fixtures and with no major injury doubts, he looks set to stick with his men for an 8th game at the Etihad on saturday; if it isn’t broke, don’t fix it!

However, this game should present the manager with a sterner test, the result of which will go along way towards proving their title credentials. Will Conte stick with his magic formula or will he see the need to change things in order to combat City’s short passing game?

As mentioned, Chelsea’s recent form has been enough to make everybody sit up and take notice. They’ve won their last 7 games and more impressively, they’ve only conceded 1 goal (in the 2-1 win at Tottenham,) which proves the theory that the ability to name an unchanged defense is a precious commodity in football.

City have won their last two league games (against Crystal Palace and Burnley) but it’s their home form which will be keeping Pep Guardiola awake at night despite his cool appearance. City need a big win at the Etihad to stop a run of 3 home draws and prove that Manchester teams can still remember how to win league games in front of their own fans!

Most analysts predict a tight game on Saturday but a look at the last 5 meetings between the two side shows that history points in City’s favour. They beat Chelsea 3-0 in both fixtures last season. Since then, both teams have employed new managers so I’m not sure how much this stat should factor when predicting the outcome of this game but Chelsea will take confidence from the fact that they have beaten Man City away 11 times since the Premier League era began, the highest number of away wins by one team against any single side.

Chelsea have the clear edge when looking at defensive records. For all their thrilling attacking football in recent weeks, it has been at the back where they have been most impressive, boasting 7 clean sheets (consecutive!) to City’s 2.

On paper, this game is a hard one to call but it’s possible to get 3.72 on Chelsea to extend their winning run with Pinnacle. The highly fancied draw also looks a decent bet at 3.63, again with Pinnacle. Man City are the bookies slight favourites with the best odds on a home win being offered by MyBet at 2.15

A lunchtime to kick (i.e. no goals) and a tight match in-store – unders screams value at odds against. Get on under 2.15 with Unibet at 2.15