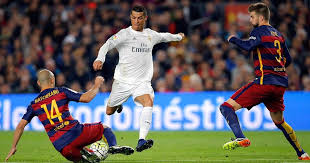 The biggest game of the weekend is perhaps the biggest game in world football; El Clasico. On Saturday Barcelona welcome their fiercest rivals, Real Madrid to the Camp Nou for what promises to be another enthralling spectacle.

A win is the only acceptable outcome for either side on these occasions but Barcelona in particular no that anything other than a win will put a serious dent in their hopes of winning La Liga even at this early stage of the season.

Real Madrid are on an incredible run of 25 league games without defeat and Zinedine Zidane’s men know that a win in Barcelona on Saturday will extend their lead over Barca to 9 points, a lead which the Catalan club will find tough to claw back when the Whites are in such good form.

With Messi, Suarez and Neymar in their team, Barcelona are capable of beating anyone in the world and they usually do. However, the Catalan’s have drawn their last 2 games which has allowed Real Madrid to open up a 6 point lead at the top of the table.

Despite their embarrassment of attacking riches, Luis Enrique’s side struggled to create chances in their last 2 league fixtures against Sociedad and Malaga but his concerns should be lessened by the return of Andres Iniesta who has been sidelined for 2 months. Iniesta has been the beating heart of this side for years and when he is out, the team obviously suffers. If Iniesta makes it then Enrique should be able to field his strongest possible side.

Not content with being one of Real’s greatest ever players, Zinedine Zidane is now on the cusp of leading Madrid on a club record unbeaten run. They’ve gone 31 games without defeat, just 3 short of the 34 game run they put together in the 1988/89 season. In addition to this, Zidane’s son Enzo made his debut in Wednesday’s Copa Del Rey rout of Cultural Leones as a second half sub and scored with his first shot!

The young Zidane is not expected to feature on Saturday but with Cristiano Ronaldo staking claim to be the world’s best player with some outstanding performances in recent weeks, Madrid will be confident of a good result in Barcelona.

Toni Kroos, Gareth Bale and Alvaro Morata are all out of contention for El Clasico but Zidane should be able to select Casemiro again after injury. His performance in the last El Clasico was a key feature of their 2-1 win at the Camp Nou in April.

It is universally agreed that this fixture is one of the most tough to call in world football with the teams usually pretty equal in terms of ability and league standing. So it is perhaps surprising to see that we have to go right back to October 2012 to find the last draw (2-2) between Barcelona and Real Madrid. Recent history shows a slight edge for Barcelona with 3 wins against Real’s 2 in the last 5 meetings:

Two consecutive draws is almost enough to be considered for Barcelona but it will be the lack of chances created in the last 2 games which will have caused more concern for manager Luis Enrique than the disappointing scorelines. No such issues for Zinedine Zidane, Real Madrid have been brilliant recently spurred by Ronaldo’s return to the astonishing form which has made him favourite to win this years Ballon D’or.

Considering Madrid’s league position and current form the 4.20 offered by BetCRIS looks decent value but we have to remember that they are not just playing any old team on Saturday. It could be argued that Barcelona need the win more and 1.85 is about the best odds you’ll ever get for a Barca home win. Though the teams haven’t shared the spoils for 4 years, the 4.25 offered by Pinnacle for the draw also looks tempting.